Late that afternoon, Taran thinks that they must have finally outrun the Cauldron-Born, only to see them reappear in the distance. He decides that they can’t run any further and must try to make a stand long enough for Gurgi and Eilonwy to escape. Gurgi howls in protest, and Eilonwy jumps down from Melyngar and grabs a bow and arrows. Taran cries to her to stop, that the Cauldron-Born can’t be killed, but she runs to the top of a hill and strings the bow. The next passage was the front excerpt in my Dell Laurel-Leaf edition, starting with “Taran seized the girl by the waist and tried to pull her away. He received a sharp kick in the shins.” (I remember spending hours as a young girl puzzling over whose job it was to pick out those passages and what criteria they used to select them. I really wished – still do, come to think of it – that was my job!)

Eilonwy snaps at Taran not to interfere. She looses her arrow and it creates a large silvery spider web in the air as it flies toward the Cauldron-Born. Taran and Fflewddur are amazed, but the Cauldron-Born pay the web no mind, and it melts away as they ride through it. Eilonwy is crushed that her spell, which she learned by listening at the door while Achren practiced and which was supposed to be a “big, sticky rope,” didn’t work. Taran prepares himself to face down the Cauldron-Born, but, at the last minute, they suddenly turn their horses and head back the way they came. Taran tells Fflewddur and Eilonwy what Gwydion said about the Cauldron-Born losing their power as they get farther from Annuvin, and surmises that they have run out of strength and are returning to Arawn. Then he compliments Eilonwy on her spider web. She blushes and says that’s the first nice thing he’s said to her, then harrumphs that he wasn’t worried she was in danger and flounces off. Taran says he “can’t make sense of that girl,” and Fflewddur says “We aren’t really expected to.”

That night, they keep watch in shifts. Taran wakes up before Eilonwy’s watch is over, and tells her quietly that in fact he was worried about her, but that the web was so amazing he forgot to mention it. Eilonwy is mollified, until Taran makes another blunder by saying “It is a good destiny that brings me such brave companions,” and she bristles at him all over again – he doesn’t care about her, he’s just happy to have helpers on his journey. She says she’s not speaking to him, pulls a cloak over her head and pretends to sleep while Taran sighs that at Caer Dallben, “nothing ever happened. Now, everything happens.” But he can’t seem to “make it come out right.” Poor Taran. The battle of the sexes never did run fair.

In the morning, Gurgi’s leg is much worse. Taran makes a poultice of herbs (Kingsfoil? That’s a weed!) for him. Fflewddur says the Cauldron-Born have forced them off-course to the point where they will lose two days if they return to the original plan. They agree to cross the river Ystrad and head on through the hills. When they make camp for the evening, they’re on the other side of the river and approaching the Eagle Mountains. But Gurgi is suffering terribly with fever and not even interested in his crunchings and munchings. Fflewddur says “Caer Dathyl is not far away… but our friend, I fear, may not live to see it.” 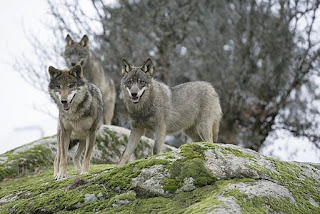 And just when we’ve almost forgotten the title of the chapter, they hear wolves howling beyond their campfire. The wolves follow them all the next day, making everyone uneasy. Fflewddur worries that they won’t find a pass over the mountains. Taran suggests letting Melyngar pick the path, an idea which Fflewddur seconds heartily: “Every horse knows its way home!” Eilonwy, who apparently is speaking to Taran again, agrees it’s an interesting idea. Melyngar leads them swiftly along the ridges – right into a ravine where a wolf is waiting. (A real wolf, apparently – not a dude that looks like a wolf). The wolf pounces on Taran!